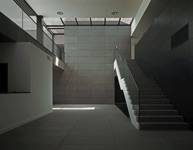 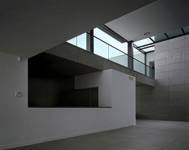 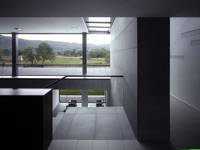 Photos by: Alberto Muciaccia
The Pettoranello industrial zone is located in a reclaimed marsh surrounded by mountains on the highway linking Campobasso with Isernia. The presence of the medieval village of Pesche dominates the valley, through which the Carpino River runs, while Pettoranello closes the valley at the southern end. The project area, the last in a series of industrial lots, is to host a square industrial building – the position and size of which had already been defined when the contract was awarded – and an office building.

The client wanted the office building to be two storeys high in the central area, with light coming in from above and rooms arranged along gallery walkways. These requirements suggested use of a very introverted, centripetal spatial configuration, but the quality of the landscape outside demanded that the building be oriented outwards.
The architects decided to combine the spatial wealth of the increased height in the central area with greater permeability to the landscape outside.

Their intentions are expressed by three different elements: a ribbon that first emphasises the longitudinal component, defining the entrance and setting up a dialectic relationship with the mass of the industrial building, and then the vertical component, identifying the methods for penetration of light from above; a continuous volume that winds around four sides to suggest a circular dynamic; a more massive body providing support to the previous element and bending over to become a roof and stairwell. Inside, the space defined by juxtaposition of the three plastic elements is designed as a phenomenal cavity in which the visual relationship with the outside changes radically with the observer’s point of view, supported by the morphological continuity of the parts which undergo no formal alteration in the physical transition from inside to outside.