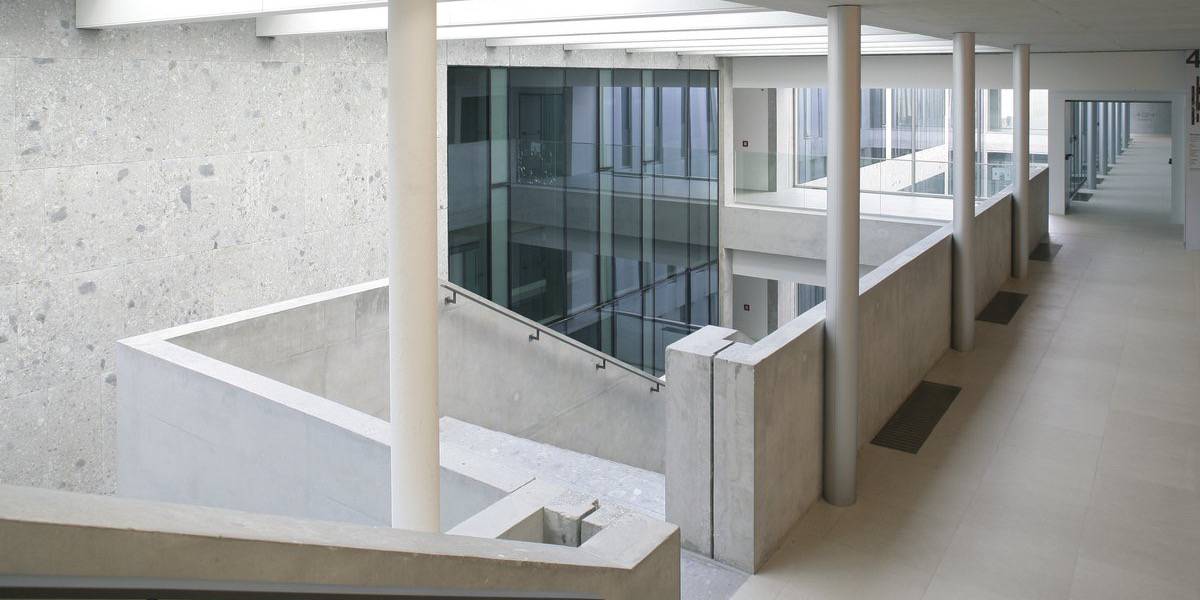 The immensity of Milanese architecture reinterpreted with "Nordic" sensibility for light and the fragmentation of volumes: this is the unusual mix that characterizes the recent project to extend the Commercial University Luigi Bocconi in Milan by the Irish duo Grafton Architects.
The intention of Yvonne Farrell and Shelley McNamara, winners of the international invitational competition announced in 2001, was, in fact, to conceive a project that was not perceived as alien, as an import, but rather as a piece of the city. Fascinated by the local architecture with its external solidity, but hiding small treasures inside, and the vitality of the nearby Broletto market, Grafton have conceived the new building as a very permeable complex, open to the city, and reflecting in full the public vocation of the university campus.

The new building occupies a rectangular lot, 70mx160m, between Viale Bligny and Via Roentgen, located within the university complex of the University Luigi Bocconi, which boasts previous collaboration of architects such as Mario Pagano, designer of the first building in 1941, Giovanni Muzio, who designed the extension of 1966, and Ignazio Gardella, designer of the building inaugurated in 2001.
In this context, the new extension interjects itself like a filtering mechanism with the city. Complex and fragmented, it is composed of several buildings that are developed in five or six floors above ground and are united by a common base of three underground floors.
The result is an articulated complex defined by compact volumes suspended on courts and semi-public spaces, and opened both internally and externally. The large foyer of the Great Hall, courtyards, and the different levels of terraces are all defined by areas with grand spaces, projections, large cuts, and openings that allow natural light to enter and illuminate.

The buildings that house classrooms, offices, a library, and the Great Hall, overlap each other, creating wells of light in the interstices that reach and illuminate nearly to daylight levels even at nine meters below ground.
This articulated system, glassed and airy inside, is enclosed outside by a compact curtain of stone, angled with respect to two arterial roads that define the lot, in order to create a public space outside, which promotes social activity and acts as a filter with the chaos of the city, but also functions to invite the visitor to the heart of the building.
The north end, which faces the artery of Viale Bligny, interfaces with the pulsing life of the city, implying, with a facade that becomes an architectural expedient, to open a "window on Milan", a symbol of the cultural contribution that the University Luigi Bocconi provides for the life of the city.

The dominant element of this project is the inclinated and projecting volume of the Great Hall, which can accommodate up to a thousand people and will function as a theatre, with scenic tower and mobile stage.
The seating area also defines the space of a large foyer outside; a semi-public space, enclosed by an extra-bright and extremely light glass facade, thanks to a particular structural system that reveals only the glass elements. Another element characterizing the facades of the building is the library, configured as a solid projecting volume that appears to be suspended over the street.

The idea was to create a "rocky shield", constructed with robust material such as Ceppo di Gré stone, always much used in Milanese architecture. Inside, all of the research offices are "suspended between earth and sky", a labyrinth that slowly rises through an interactive network of courtyards, bridges, terraces, and corridors that stimulate overlap with the possibility of horizontal and vertical movements.

This place of exchange was thought of as composed of rays of space, suspended to form a spectacular cover that filters light at all levels.
For flooring for all the connecting areas, given the high flow of people and the resulting wear – but also for the offices of all levels above ground – an extremely durable material was chosen: slabs of Azul Bateig from the New Stone collection by GranitiFiandre. The particular color of this recomposed rock merges perfectly with the other,materials used in the building – exposed concrete, Ceppo di Grè stone, and glass – providing the walking surfaces the resistance necessary and all the performance advantages of grés porcelain, contributing to Grafton’s intention to build something "strong and bold".