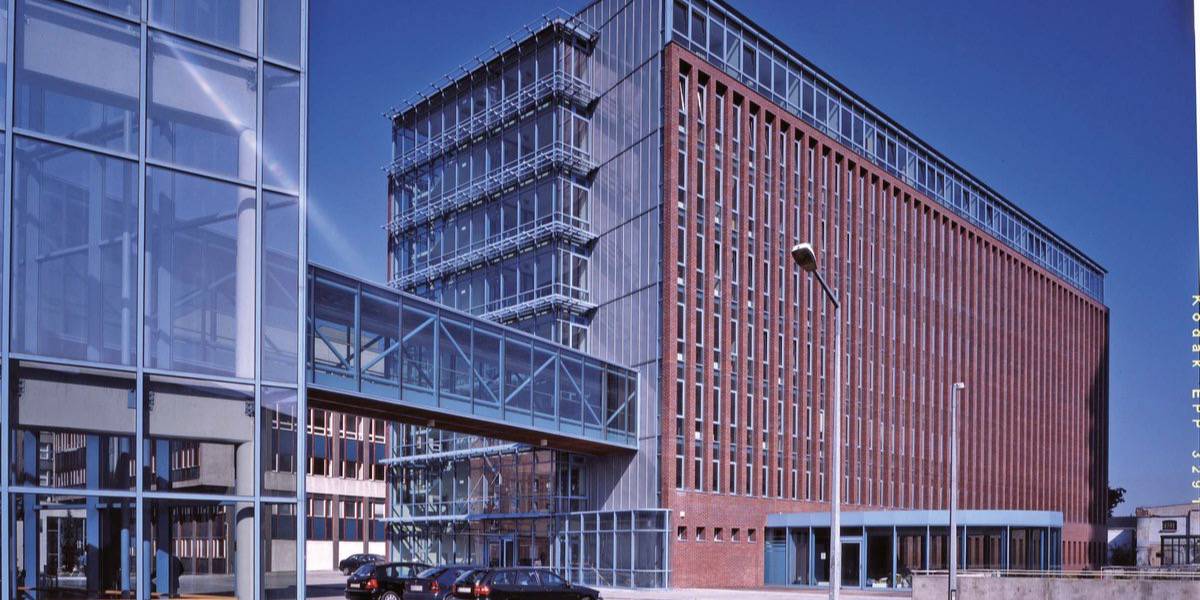 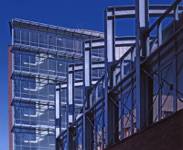 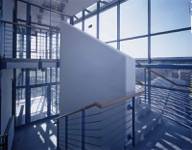 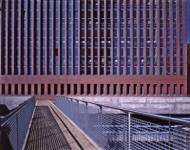 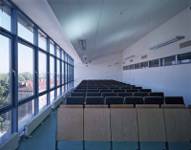 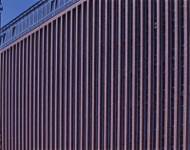 The new buildings of the Faculty of Economics in Krakow are set in its existing complex, with respect for its main lines, letting them foster the growth of a piece of city that mixes the old and new. Romuald Loegler’s project for expanding the Academy of Economics in Krakow involves two buildings, the Sport Institute and the Financial Institute, built in two separate stages and connected by a bridge suspended at the third floor. The first building features a juxtaposition of solids and voids, of transparent structures built with steel-glass technologies and blank volumes clad with aluminum panels; the second building combines the transparency of large windows with the statuesque quality of exposed brick cladding.

The Financial Institute has a rectangular floor plan, with a longitudinal axis oriented northeast/south-west, covering eight floors above ground (total height: 31.75 meters), plus twounderground floors for parking.
The ground floors hold service spaces, such as the changing room and reception areas. On the upper floors there are classrooms (mainly sized for a fifty-student capacity), language laboratories, and study rooms. The rooms for teachers and assistants are on the last two floors and face east. The elevators are in the structure’s central core, as are the horizontal distribution hallways that cross the building’s length. The core of service areas takes up the middle section of the structural grid, 680x630cm, made of exposed bricks with steel elevators.
Continuity between the distribution spaces (hallways and stairways) and the rooms and offices is achieved by the choice of materials.
All the walls are white plaster and the floor is continuous throughout the building’s different areas.

For floor coverings, soft grey porcelain stoneware slabs, Aghia type in 30x30cm size, produced by GranitiFiandre, were chosen for their technical characteristics, such as durability and easy maintenance and cleaning. The distribution of the spaces is functional for user trajectories; the stairwells are located on the building’s two heads, to the north and south, and close these two façades with transparency.From the outside, the Financial Institute is a glass box concealed by a grand brick mask.

The architectural language that Loegler uses takes inspiration from 19th-century industrial building, of which we have important examples in Italy, such as the SNIA building in Torviscosa, and is reminiscent of Sullivan’s early buildings, especially the Wainwright Building from 1890.
The choice of an exposed brick shield is technological and functional for controlling thermal exchange and is also a formal choice. The very tight pace of the vertical elements, almost like pilasters marking the grate of the windows, accentuates the precision of the façade.
Observing the west façade, which mirrors the east façade (photo 5) but without the entrance volume, the severity of the façade’s form can be more readily seen. The monumental quality and grandness of the east-facing façade are achieved through the base, which marks the ground floor with a solid volume, interrupted only by the glazed structure of the entrance. In this solid surface, small windows are set, in keeping with the modularity of the windows that vertically mark the façade.

The eastern façade’s coping was made with a glazed horizontal band, consisting of openable elements alternated with fixed elements; the transparent element that goes around the building, marking the northern façade.
This is a curtain wall without base and coping, completely exposed to view. The extruded aluminum structure of the technological glazing follows an a-b-a rhythm (80cm-160cm-80cm) which lets it mark out a kind of string-course, maintaining transparency.
The horizontal extension of the longitudinal façades is only noticeable because of the basement and the upper glazed band. Only from the front can we perceive the building’s number of floors and see the brick cladding as a grate placed on top of the building. The Financial Institute’s perspective view, on the other hand, suggests a different interpretation, that of a solid brick body with thin vertical incisions.

Romuald Loegler is among architects who have succeeded in responding with a modern approach to the problems of a country rent by the Communist regime, managing to look at the contemporary architecture of Western Europe and give it a fresh interpretation, understanding its trends, technologies and the new materials. His expansion of the University of Krakow is the fruit of such a process. It embodies the cardinal principles of the ethics of modernity, in addition to expressing Loegler’s tendency to “liberate” architecture from simplified compositional systems and connect it back to the expressionist fragmentation of Polish culture.