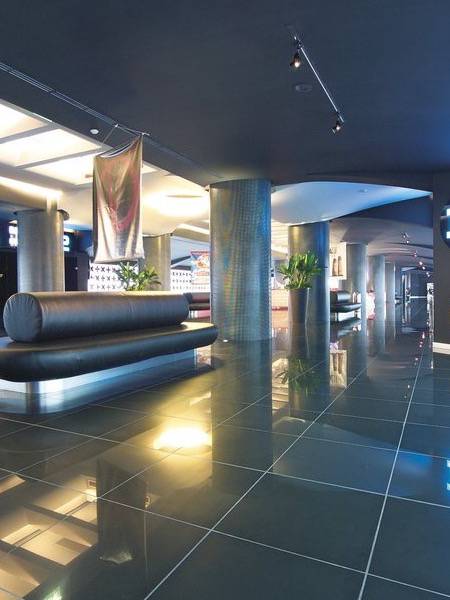 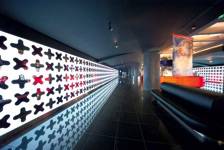 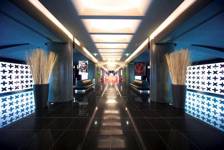 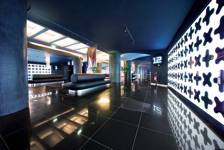 The shadows and the dream. Natural evolution of what Brunetta defines as the passage from hovels to cathedrals, the multiplex is taking the process of replacement of traditional historic environments to the extreme consequences.
Thus, alongside the great commercial structures, theme parks and outlets or other magnets of consumption of tangible and intangible goods, no more than two decades ago in the United States and in a few European countries - much more recently in Italy - came the multiplex, extreme mutation of the movie house.
A structure that does not only aspire to the multiplication of projection rooms, but to a complete alteration of the film event, integrating it with other activities like shopping and amusements.
It is a transformation that, while it involves the social and symbolic value of the cinema and the urban function of the place of entertainment, has often given rise also to a sort of non-place lacking in any architectural form, enormous «... empty boxes, modular containers, great cubes filled with seats or chairs, according to the usual design repeated ad infinitem in space and time».

Until now, whether it was a nickelodeon, a movie-theater or one of our many small town picture shows with names like Astra, Lux, Fulgor, Splendor, Magic, there was a link between the movie house and urban space.
The multiplexes, located as they are at the margins of the metropolitan area, along the freeways and highways of the regional infrastructural networks, capable in this way of modifying the flows of mobility by their own existence, what was once a fundamental service in the neighborhood where we lived - almost an extension of the home, with the quality of the neighborhood measured on the basis of the number and location of the theaters - no longer exists.
The topographic positioning has been lost. It is normal, therefore, that the great foyer, the artificial climate-controlled interior of the multiplex has taken the place of the façade as an instrument of communication: the anonymity of the container, the absence of a rear entrance have transformed the foyer - from a sort of crude county fair with garishly painted shacks housing the sharp-eyed matron, the pretty milkmaid, but also the bull’s eye, the airboats, the fortune tellers, in short all those freaks and marvels that populated country fairs at the beginning of the 20th century - into containers for the appetites, gastronomic and otherwise, of the modern moviegoer.
And like the façades of those shacks, where every inch of space was occupied by wording, a painted figure, light bulbs or embossing, these compulsory trajectories give the place a significant role of social communication.

There is a design metaphor that develops around the theme of “light”, which represents, as in Edison’s kinetoscope, the world of the movies.
The movie seen as a projection of light is metaphorically interpreted by the multiple and variegated light sources of the gallery: pastel lights that change colors behind the luminous walls covered with reflecting elements, suffused light from soft, symmetrical fissures in the dark false ceiling, intense purple light in the transparent textures of the counter surrounding the oval perimeter of the bar.
This divertissement is amplified by the clear reflections on the black floor, Diamond Black 60x60 polished porcelain tile from GranitiFiandre's GeoDiamond collection, creates a reflective surface that enhances the decorative elements of the side walls. that, highly polished, appears to be a dark lake on which the furniture and people float, marking and animating the route towards the projection rooms.

For the entrance and the interiors of the restrooms, as well as for the signs, the decoration makes use of unusual, amusing materials.
The signs, in “Xlarge” format, go beyond the purpose of mere communication and become an integral part of the whole environment and its architecture. The self service machines and ticket booths, located just outside the entrance to the multiplex, have been given a different image, more faceted and glittering, in line, however, with the leit-motif of the gallery.
Here the light, which is more intense, charged, warm in shades of orange, contrasts with the elaborate false ceilings spoked in white and the undulating perforated metal of the walls.
A large opening covered by mosaic tiles goes through the thick wall and provides a view of the inside of the self service area, where niches have been created in the perimeter for machines selling snacks, beverages and candy, like an irresistible, unique shop window.
And it is also thanks to the decoration of these lightless corridors, these vestibules, these caves, that - paraphrasing Yourcenar - we continue to buy tickets from the cashier, the sole intermediary between the shadows and the dream.