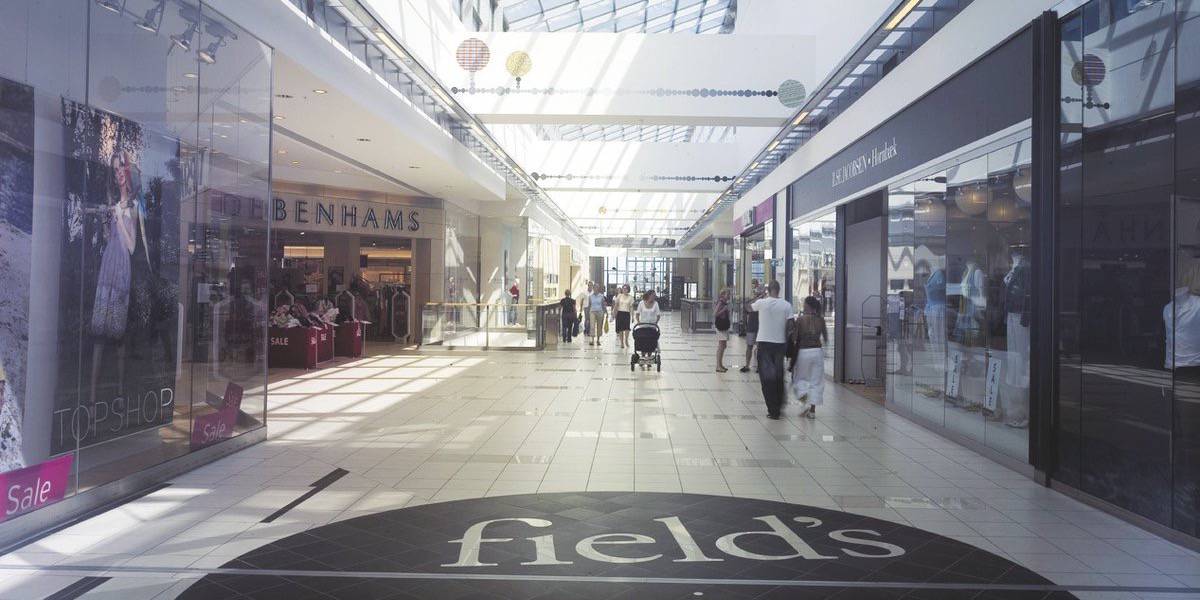 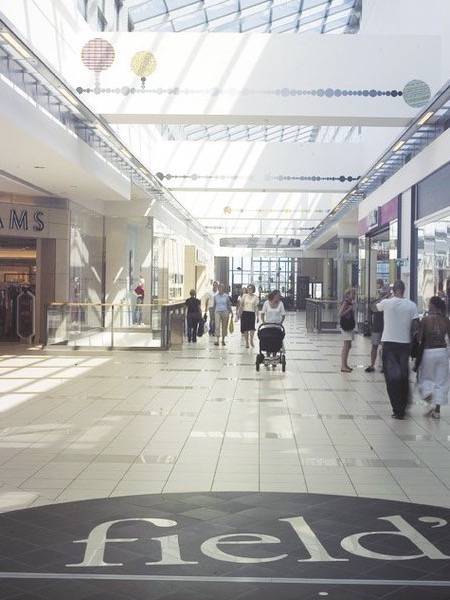 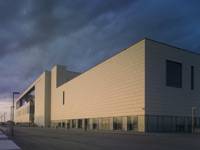 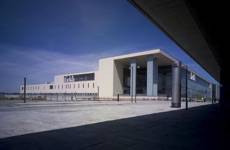 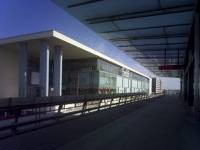 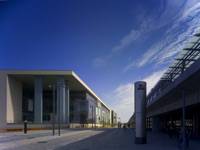 Ørestaden is a new neighborhood on the outskirts of Copenhagen. It is a settlement under construction according to the guidelines of a well-defined masterplan.
Within it is Field's, a center for shopping and recreation that is organized like a small, specialized city. Construction on the neighborhood is currently at a stage in which the large Field's block looks like a fortress of stone and glass, standing alone, isolated in a landscape of the sky and land pair. The total absence of any element to break up this simple picture lets you imagine the sea right beyond the building.
The landscape is totally flat, without the least natural rise, so that the stretch of the sea becomes an extension of it as if the land simply switched the visual qualities of its surface. The often gray and uniform Danish sky reinforces this phenomenon, homogenizing the colors of all of the scene's elements.

The construction's current forceful impact will surely be mitigated by the buildings that will spring up around it, with which the center's volume will institute a dialogue whose terms are as of yet unknown. The new neighborhood will take shape, confirming the success of each individual architectural episode.
The masterplan's directives aim to organize the works in a wide and well-planned road system that, in addition to connecting the area, connects with the larger road system connected with the capital.

The desire to transfer an idealized version of the outside life to the inside is clear in the intentions of the client and the architects, the C. F. Møller Architects studio (a staff of over 200 based in Denmark, headquartered in Århus, with offices in London and Oslo as well).
The feeling of safety induce by the large exterior wall systems and the amount of light collected by the enormous façade windows and the roof help us imagine interiors that are large and inviting. The visitor will not be disappointed. The simple spatial organization and the natural light that penetrates the interior determine the quality of the spaces.

The C. F. Møller Architects studio's wide spectrum of skills, with the support of the construction company Phil & Son, enabled them to completely manage the total project. Architects, structural and technical engineers, consultants for the façades and for innovative technological and lighting specialists, supported by the specific skills of cutting-edge companies, converged to produce a highly sophisticated complex.
A hundred and ten stores on three floors, another two floors of commercial offices and two levels of parking for up to three thousand cars, over an 115,000 square meter area, a total project cost of 248 million euro and 31 months of building. The result is a building with an austere appearance, emphasized by the exterior cladding on the façades with large panels (120x60 cm) of GranitiFiandre's Crema Marfil Select.
The use of this material is based on two criteria.
The first is aesthetic, for its formal features that make it look like fine natural stone. The second is technical in nature and has to do with physical characteristics that make it highly resistant to the elements and greatly reduce maintenance costs.

The architectural language, austere on the exterior façades, is expressed more delicately inside, leaving shop windows room to convey the appeal of their products. In this case, the definition of an interior urban space is found in the contrast between the natural light in the passages and artificial light which each shop customizes, adapting it to their needs. The organization of the distributional spaces draws on elevators and aerial passageways that emphasize the depth of the perspective planes.
The project's complexity is clear in the movement of people and constant intersecting of the horizontal planes with vertical planes.
Seven meter wide passageways open into large spaces, defining a system of roads and squares that organizes the shopping area. Going shopping is a chance to take a walk and to take children out even in bad weather.

Field's, in the best traditional of megastores of recent decades, becomes a pleasant island, an oasis to find cover and pass free time.
The intuitive nature of the routes combined with their constant intersecting provide new perspectives. The design of the flow of movements provides optimal freedom in its use, leaving visitors the option of choosing their path almost at random, like they might if visiting a park on a Sunday afternoon.
This feeling of dynamism is also to be seen in the texture of the floors, made entirely of GranitiFiandre porcelain stoneware, with a staggered effect in laying the slabs of Crema Marfil Select (40x40) and Ardesia Blue listel pieces (8x40), creating a pattern that seems to represent the paths of the people who infuse Field's with life.

Evidence of the client's specific intent to provide a relaxing, welcoming place is the Arne Jacobsen Lounge, a place expressly dedicated to relaxation and reflection. It is a rest area that is a full homage to the Danish architecture master; a little piece of his work inserted in a shopping center. This space reproduces the lounge of the Radisson SAS Royal Hotel down to the furnishing details, offering a mini lesson in architecture and design to those who have wearied of shopping and want to rest here for a moment.